This band is characterized by very large megalithic sites, some of which are several kilometers long and others several hundred metres high.

Many megalithic sites North of the Central Balkan are laid out in latitudinal bands.

There are at least 3 bands of pyramidal formations stretching East-West.

Further South there is the large pyramid complex of the Black Peak.

And then before the Central Balkan mountain range there is the Double Pyramid of Ostrets.

The Rampart of Sopot is one several sections of a rampart that might stretch over 100km. And the Double Pyramid of Ostrets is more than twice the size of Bania.

By their size and lack of decorations they seem to have a more functional purpose as opposed to replicating the position of the stars as we see in the Middle Mountain.

The megaliths and pyramidal formations are less eroded than other regions. But as you head East the erosion patterns are heavier.

Interestingly the North sides of the Rampart of Sopot and the Double Pyramid of Ostrets have similar inclines of 52 degrees which reminds us of the Golden Ratio.

Based on Rudolf Steiner reading of the Akasha Chronicle we can hypothesize that the large megalithic sites are the result of the Lemurian epoch.

And there are few if any grid lines of quartz blocks like we see at most megalithic sites in the South.

Based on Rudolf Steiner‘s reading of the Akasha Chronicle we can hypothesize that the large megalithic sites are the result of the Lemurian epoch.

The stones might be telling us that these huge megalithic sites were built at an earlier epoch, that of the Lemurians based on our interpretation of Rudolf Steiner’s reading of the Akasha Chronicle.

The stones of the North Central Balkan band are either blue grey granite or a red sand stone composite cement that contains pieces of quartz.

There are no lines of quartz blocks in the granite stone as we see in the Middle Mountain.

And we have found no skewer holes or suture marks which could mean that they were built with a different technique at a different epoch of humanity.

The band of megalithic sites North of the Central Balkans comprises

Sopot
The Rampart of Sopot is a huge 6km long, 120m high and 800m wide pyramidal formation that held back the waters of the Paratethys Sea.

Vrabevo
The pyramid of Vrabevo is the most distinctive pyramid in a line of similar pyramidal formations that stretch East-West over 50 km.

Hirevo
Hirevo is a pyramidal formation with a summit overlooking the plain below.

Damyanovo
Damyanovo is a pyramidal formation that reminds us of the constellation of Cancer.

Ostrets
The Double Pyramid of Ostrets is a huge double pyramid that acts as a funnel for the megalithic sites North of the Central Balkan.

Pushevo
Pushevo might be a part of the rampart that continues from Sopot 100 km away.

Kaspichan
Kaspichan is a circular pyramid. It is one of several in the immediate vicinity.

Madara
Madara is one very large megalith surrounded by a stone wall that was built in historical times to contain it. 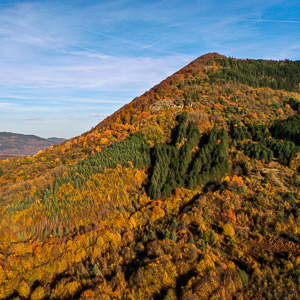