The huge size and design of the pyramid tells us in plays a central role in the network of sites in the region. The location of the double pyramid acts as a catalyst for the megalithic sites North of the Central Balkan. The large blocks of granite that form the levels of the pyramid as well as the smaller stone mounds that are built on top tell us about the different epochs of megalith building in Ostrets. And finally the composition of the stones with its quartz content tells us about the purpose of the double pyramid to create a vertical link with the heavens above.

The Double Pyramid of Ostrets is located North of the Central Balkan mountain range.

The base of the Double Pyramid of Ostrets is around 600 metres elevation whilst its summit is around 1060 metres. It rises 500 metres from base to summit. Its elevation and lack of megalithic constructions at its base points to the fact that it was probably built at a time when water levels were much higher and covered the base of the pyramid.

The South-East side of the double pyramid is heavily eroded whilst the opposite North-West side does not show signs of erosion. It tells us about the age and history of the pyramid. It was probably built at a time when water levels were much higher. Later it was probably hit by large tidal waves like mega tsunamis that probably reached up to 900 metres elevation.

Based on current geological research this was only possible at the earliest during the Middle Miocene and the existence of the Paratethys Sea. It confirms the patterns of erosion we see at the rampart of Sopot.

Ostrets is huge. It is 5 times the size of the Great Pyramid of Giza.

There are at least 5 distinct levels in Ostrets plus the summits. The most significant level is located at 880 metres. This level is a 10 metre rock face that surrounds the pyramid.

There are smaller mounds on Ostrets and around its base on the East side. They might date back to a later period.

The levels of the pyramid are made from huge granite composite blocks that are stacked on top of each other.

The stone blocks are rectilinear in shape. It is different from the rounded shape found South of the Central Balkan in the Middle Mountain.

By its gargantuan size the Double Pyramid of Ostrets could belong to the earliest epoch of megalith building, the Lemurian epoch.

But the rectilinear blocks that are stacked on top of each other shows us a different building technique than the rounded shapes of the Lemurian epoch we see in the Middle Mountain.

Is it a sign of a different epoch of megalith building?

Or is it the result of different local circumstances, for example no volcanic activity North of the Central Balkan?

And therefore at the same Lemurian epoch different techniques were used to build these gigantic pyramidal formations?

More research and cross analysis is required. We welcome all volunteers to help draw conclusions of the data we collect.

It is possible that we might have found a skewer hole in the base of one of the levels of Ostrets but this needs to be verified.

At the Double Pyramid of Ostrets we find blue-grey granite with quartz crystals. We also find a gritty cement mix that contains larger pieces of quartz. This cement mix seems to form the base of the pyramid. 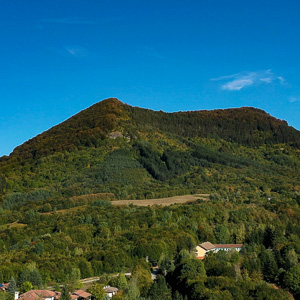