Skip to content
Madara is a very famous historical landmark in Bulgaria. The Madara Rider or Horseman is ubiquitous in Bulgaria because it is stamped on all coins. The effigy of the horseman hunting with his dog is carved at a height of 30 metres on the rock face looking West. It is attributed to the period of the First Bulgarian Kingdom and probably to Khan Tervel. But few people ask: Why was the horseman carved at this specific location?

Few visitors who strain their necks to look up at the horseman notice the surrounding area. The horseman is located on the Western side of a pyramidal formation that itself is surrounded by many other pyramidal formations and plateaus. Close by there are other perfectly rounded pyramids such as Kaspichan.

And at the base of the rock face there is a very interesting megalithic site. One large granite megalith 3 metres high and around 5 metres in diameter is surrounded by a stone wall that probably dates back to the Middle Ages or maybe even the time when the effigy of the horseman is said to have been carved around the late 7th century. At the same location as the megaliths there are ruins of a pagan temple and/or Medieval Church. And it is interesting that the megalith was not destroyed or even completely encircled. It was surrounded on all accessible sides with a small entrance in the wall facing the rock face as if it was sacred.

The walled megalith is very similar to one seen in Machu Picchu in Peru dating to the earliest period of megalith building, the Hanan Pacha period.

Across from the walled megalith at Madara there is a rectangular elevated platform of granite. It is completely flat and measures around 10 by 12 metres.

And there are other smaller megaliths in the same location.

The area at the foot of the Madara Rider is attributed with magical properties. There is a water source and more Roman or Bulgar ruins. On the South side of the Horseman tucked underneath the cliff there is a small chapel that is still in use to this day.

The megalithic site of Madara is located North of the Central Balkan relatively close to the Black Sea.

Madara is surrounded by numerous megalithic sites all the way through to the Black Sea. Most of these sites have not yet been visited and added to the inventory. Only some are already inventorised:

Pushevo
Pushevo might be a part of the rampart that continues from Sopot 100 km away.

Kaspichan
Kaspichan is a circular pyramid. It is one of several in the immediate vicinity.

Sopot
The Rampart of Sopot is a huge 6km long, 120m high and 800m wide pyramidal formation that held back the waters of the Paratethys Sea.

Vrabevo
The pyramid of Vrabevo is the most distinctive pyramid in a line of similar pyramidal formations that stretch East-West over 50 km.

Hirevo
Hirevo is a pyramidal formation with a summit overlooking the plain below.

Damyanovo
Damyanovo is a pyramidal formation that reminds us of the constellation of Cancer.

Ostrets
The Double Pyramid of Ostrets is a huge double pyramid that acts as a funnel for the megalithic sites North of the Central Balkan.

There is a connection between the location of the megalithic site of Madara, the positioning of the Madara Rider facing West and the numerous and large megalithic sites, plateaus and pyramidal formations that lay to the East between Madara and the Black Sea.

The location for the carving of the Madara Rider was chosen first because it is the Western most point above the valley and second because it is on the side of an important pyramidal formation and thirdly because the location of the megalithic site with the walled boulder and the granite platform.

It is probable that Khan Tervel had the horseman carved or at least added inscriptions to own it because it overshadowed the boulder and platform below. It was a way for him to acquire its power.

The rock face under which lies the megalithic site is eroded by water.

There is a large walled boulder and an elevated granite platform.

The entrance to the wall that surrounds the large boulder is facing the rock face and the granite platform.

There is one large granite boulder that is 3 metres high by 5 metres in diameter.

The size of the platform and abstract unfinished shape of the walled megalith tells us that it probably dates back to the Lemurian epoch.

The large walled megalith and the platform are made from blue-grey granite. 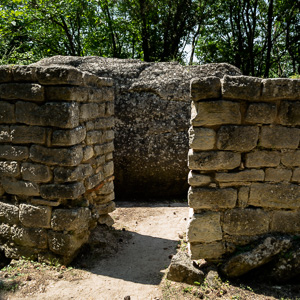 Article Name
Madara Megalithic Site
Description
There is a connection between the location of the megalithic site of Madara, the positioning of the Madara Rider facing West and the numerous and large megalithic sites, plateaus and pyramidal formations that lay to the East between Madara and the Black Sea.
Author
Julien St Hug
Publisher Name
Bulgaria Pyramid
Publisher Logo