Skip to content
The Bulgarian pyramids talk to us by their location. They are a map of the heavens above. They mirror the layout of the stars and the movement of the planetary bodies.

The megalithic sites of Bulgaria form a network of connected nodes. Each one is like the part of an engine, an instrument in a great orchestra. Some are bigger and some are smaller but all the instruments share in the melody for us to hear the message.

Why are there pyramids in Bulgaria?

Based on Rudolf Steiner in his reading of the Akasha Chronicle Bulgaria and the Mediterranean region is at the crossroads of the ancient continent of Lemuria which was located in the Indian Ocean and Atlantis straddling the continent that existed between Europe and Africa on one side and the Americas on the other. The lands of Bulgaria were the bridge between the 2 epochs of humanity.

What does the location of the pyramids tell us?

The location of the numerous megalithic sites of Bulgaria tells us that we are hearing a far distant epoch of humanity.

The ability to plan the layout of so many megalithic sites on such a huge scale over hundreds of kilometres of mountain terrain is a feat that would be difficult to achieve even today.

The capacity to fathom the heavens above and distinguish star patterns, constellations and planetary movements let alone reproduce them on Earth tells us that the builders of the Bulgarian pyramids had faculties that were lost in later historical times.

What are the regional bands?

The sites are lined up in latitudinal bands across the Bulgarian mountains. From North to South we have several bands:

The North Central Balkan is characterised by very large megalithic sites made from blue grey granite.

The Central Balkan mountain range with its high peaks has pyramidal formations that act as relay stations connecting the megalithic sites North and South of the Central Balkan.

The Middle Mountain is characterized by numerous megalithic sites that are decorated with standing stones.

The Rhodope band has many sites that are heavily eroded.

Why do we find astronomical patterns in the location of megalithic sites?

On the map of the Bulgarian pyramids we find patterns that remind us of constellations such as Orion and the Winter triangle and star systems like Sirius.

According to Rudolf Steiner the purpose of the pyramids was to cherish the pouring down of cosmic harmony from above like the rays of the sun.

Divine cosmic harmony infused the Lemurians and early Atlanteans. They were an integral part of the planetary dance. They understood it and were infused to reproduce it on Earth. 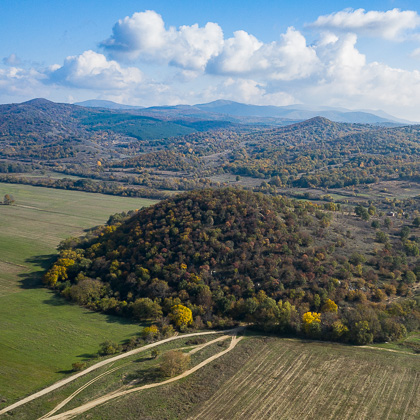 Article Name
The location of the pyramids
Description
The megalithic sites of Bulgaria are lined up in latitudinal bands across the mountain ranges. Their location tells us about a far distant epoch of humanity. The pyramid builders had the capacity to fathom the heavens above and distinguish star patterns, constellations and planetary movements and reproduce them on Earth.
Author
Julien van Dommelen
Publisher Name
Bulgaria Pyramid
Publisher Logo