Skip to content
The composition of stone varies depending on the location of the megalithic site. Stones are made from different types of granite, limestone or white river stone. Each has different qualities and produces a different sound.

Quartz plays an essential role in the composition of the stone. It is found in the granite and composites that were used to build most megalithic sites.

The 3 types of stone

Each has a different texture and emits a different sound. Each talks to us in its own way. The type of stone often varies depending on the region.

Many sites especially in the Middle Mountain are made of granite that includes both pieces and chunks of quartz.

Further East towards the Black Sea basin megalithic sites are made of Limestone.

Rudolf Steiner’s account of the Akasha Chronicle elucidates the enigma surrounding the nature and origins of the stones. Man could harness and transform the naturally occurring rock from volcanic activity into a specific composition and shape.

Lemurians knew how to use the rock ensuing from the lava flows of volcanoes. And he had the capacity to transform the natural stone into a composite material to fit his purpose.

And the early Atlanteans had the capacity to transform the power of plants into energy to mold stone into the desired shape.

This insight confirms research carried out at Sacsayhuaman in Peru on the limestone blocks used to build the famous walls.

And it also explains why megalithic sites are made from different types of stones in different regions. In the North central Balkan we find mainly blue grey granite and a cement composite of red sandstone with pieces of quartz. In the Middle Mountain further South we find a gritty yellow quartz mix and white and black granite. In the Eastern Rhodope and further East towards the Black Sea we find limestone.

The megalith builders built with the natural materials that were available around them and transformed them. They did not necessarily transport huge stone blocks across the Central Balkan mountain range that culminates at 2000 metres altitude.

At most Bulgarian megalithic sites we find quartz both in the cement mix that makes up the stone as well as blocks of quartz that are inlaid in the granite in parallel lines like a stone sandwich. Quartz is a key element to understand the purpose of the pyramids. The energetic function of quartz gives the pyramids their capacity to transfer energy.

Horizontally they distribute energy like a network across a large area.

Vertically the pyramidal formations act as nodes in a network. They channel energy between Earth’s core and the Universe.

Quartz plays a fundamental role at all levels of the megalithic network in Bulgaria.

At the micro-level quartz is in the cement mix that forms the granite.

Blocks of quartz are inlaid in the stones.

And quartz lines form a grid underlying megalithic sites to energise them.

The alignments of clusters of megalithic formations span several kilometres to distribute energy on a bigger scale.

And on an even larger scale we see latitudinal bands of megalithic sites across hundreds of km.

Quartz in the granite energises the entire network from the smallest stone at the micro-level to the macro-level of mountain ranges that span the whole of Bulgaria.

The Lemurian like the early Atlantean had the capacity to feel the power of quartz and granite and how it connects Earth to the cosmos. And he knew how to use it to serve his will.

The purpose of the quartz is to create an energetic connection between Earth and the cosmos. The minerals in the stone are like an antennae that communicates with the heavens above. 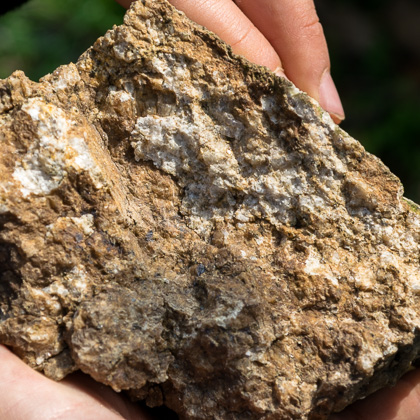 Article Name
The composition of the stones
Description
The stones at Bulgarian megalithic sites are made from granite, limestone or white river stone. Quartz is found in the granite and composites. The composition energises the sites and tells us about their purpose.
Author
Julien van Dommelen
Publisher Name
Bulgaria Pyramid
Publisher Logo