Skip to content
The Double Pyramid of Binkos is one of many megalithic sites in the region of Sliven in Bulgaria. It has 2 summits joined by a concourse. It is made of limestone blocks that are heavily eroded. There is a second smaller and lower double pyramid with a perpendicular alignment to the East.

The Double Pyramid of Binkos is located on the Southern side of the Central Balkan mountain range and at the most Eastern point of the Middle Mountain.

Binkos is surrounded by many megalithic sites, many of which have not yet been visited and added to the inventory. Some are already inventorised:

The base of the double pyramid is located at 370m elevation. The summit are at a around 480m.

The limestone blocks that form the pyramid are heavily eroded. It is a common feature for the sites that are further East and closer to the Black Sea basin.

Compared to the the design of other double pyramids, Binkos has sharper summits. The summits are smaller and the concourse is narrower than that of the Double Pyramid of Bania.

There are no specific rock formations on the double pyramid.

The double pyramid is aligned North-South but it is Off True South by 15 degrees.

The limestone blocks form distinctive levels which are clearly visible at the summit of the pyramid.

The limestone blocks are relatively large. The larger single blocks are around 2m by 2m. They are stacked on top of each other.

Even though the blocks are heavily eroded they seem to have been made into a rectilinear shape.

It is possible because of its large size that this double pyramid was built at the Lemurian epoch.

Compared to other Double Pyramids further West in the Middle Mountain region like Bania or even on the other side of the Central Balkan mountain range like Ostrets which are made with granite the Double Pyramid of Binkos is made from limestone.

Limestone is commonly found at other megalithic sites in the East of Bulgaria like Slanchevo.

Limestone does not contain quartz and there are no signs of quartz inlaid in any stone like in the Middle Mountain. 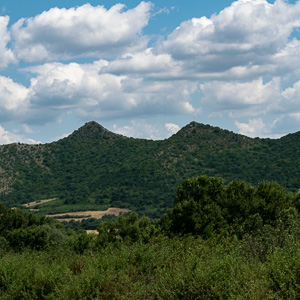 Article Name
The Double Pyramid of Binkos
Description
The double pyramid of Binkos has 2 summits joined by a concourse. It is made of limestone blocks that are heavily eroded.
Author
Julien St Hug
Publisher Name
Bulgaria Pyramid
Publisher Logo