Sokolitsa is a double pyramid that is located in close proximity to many other megalithic sites. There are megaliths from the Lemurian and Atlantean epochs.

Sokolitsa is located in the Middle Mountain band of megalithic sites.

Sokolitsa is surrounded by many megalithic sites, many of which have not yet been visited and added to the inventory. Some are already inventorised:

Rozovets
Rozovets is one of the most extensive and best preserved megalithic sites in Bulgaria.

Mihiltsi
Mihiltsi is a megalithic site that has both Lemurian and Atlantean stones.

Bania
The Double Pyramid of Bania is an elongated pyramid with 2 summits and concourse.

Hisaria
Hisaria is a pyramid that is decorated with many clusters and standing stones.

Begovo
The megaliths of Begovo are a cluster of stone formations positioned on top of a pyramidal formation.

Pesnopoy
The Double Pyramid of Pesnopoy is a very large pyramid that is aligned East-West.

Stryama
The Pyramid of Stryama tells us how megalithic sites are connected as a network to form a grid.

The Western summit of the double pyramid of Sokolitsa is at 350 metres elevation.

The double pyramid is heavily eroded both by water over long periods of time but also by human destruction.

The North-East summit of the double pyramid is slightly more elevated than the South-West summit.

The South-East corner has a large promontory.

The double pyramid is aligned North-East to South-West.

There are several levels at Sokolitsa.

At Sokolitsa we find both Lemurian stones that are larger and less well finished and relatively smaller better finished Atlantean stones.

The Lemurian stones are much larger and are usually found under the Atlantean stones that are relatively smaller.

Some early-Atlantean megaliths are triangular shaped.

Some megaliths are inclined away from the Sun at around 20 degrees off a North-South angle.

In some megaliths we find suture marks.

The megaliths at Sokolitsa are made from a granite composite that has quartz crystals.

In some megaliths there are diagonal lines of quartz blocks at around 50 degrees off an East-West axis that reminds us of the golden ratio, the divine proportion found in nature and the cosmos.

There are probably grid lines of quartz that underpin the megalithic site. 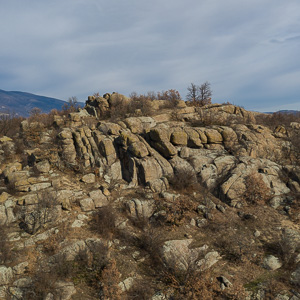 Article Name
The Double Pyramid of Sokolitsa
Description
Sokolitsa is a double pyramid where there are megaliths from the Lemurian and Atlantean epochs.
Author
Julien St Hug
Publisher Name
Bulgaria Pyramid
Publisher Logo