The megaliths of Begovo are one of the numerous sites in the Middle Mountain that is located in between the Central Balkan mountain range to the North and the lower Thracian plain to the South.

Begovo is surrounded by many megalithic sites, many of which have been visited and added to the inventory:

It reflects the layout of part of the heavens above. But which part?

The megaliths of Begovo are located on top of a pyramidal formation that is 30m elevation.

Like at other megalithic sites in the region the erosion patterns are relatively mild. Some stones have been tipped over.

Layout of the megaliths

All the megaliths are on the South side of the pyramidal formation.

The clusters of stone are located on several levels including the summit. There are none at the bottom of the hill as if the area was not accessible when the megaliths were built.

There are 2 distinct sizes of megaliths. The larger ones underneath act as bases or plinths for the relatively smaller stones that are standing on top.

The stones are rounded as if they had been shaped when the granite was still soft and malleable.

The larger less well-finished stones can be associated with the Lemurian epoch.

The relatively smaller standing megaliths that are better finished and positioned on top of the larger ones can be associated with the Atlantean epoch.

The stones are positioned to face South but they are standing upright. It is similar to the position of the Standing Stones of Rozovets.

The megaliths of Begovo are made from the same granite composite as other sites in the Middle Mountain. It contains quartz granules. 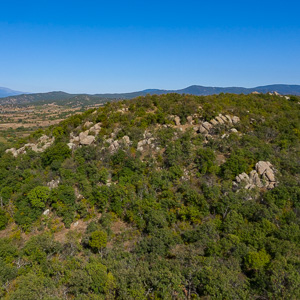 Article Name
The Megaliths of Begovo
Description
The megaliths of Begovo are a cluster of stone formations positioned on top of a pyramidal formation that is the Southern most point above the Thracian plain below.
Author
Julien St Hug
Publisher Name
Bulgaria Pyramid
Publisher Logo