Skip to content
The patterns at the megalithic sites in Bulgaria are common to other sites across the world. The presence of patterns is proof of a cosmic impulse that permeated the will of the original pyramid builders. The commonality of patterns tells us that they reflect a harmony that finds its sources beyond the individual pyramid builder or the community that built these precise structures.

The fact that we find the same patterns across different locations worldwide in Egypt, Peru, Turkey and probably many other megalithic sites still waiting to be discovered tells us that the original impulse was more than global.

The presence of patterns is proof of a cosmic impulse that permeated the will of the original pyramid builders.

And listening to these patterns is like hearing music. We vibrate to the melody of numbers like the Monad 1 of the Sun, the Duad 2 of the double pyramids, the Triad 3 of standing stones, the number Five and its connection to Venus as well as the Golden Ratio. These number patterns are found at Bulgarian megalithic sites and across the world. They are also found in nature and the Universe.

It tells us about the common impulse that animates Earth and the Universe and is represented in the stones of the pyramids.

Understanding the patterns is crucial to deciphering the message and hearing the harmony of the spheres whilst recognising our cosmic origins.

The Golden Ratio
The golden ratio also known as the divine proportion permeates megalithic sites in Bulgaria. It is found in the design of pyramids and the shape of individual stones.

Sun
The preeminence of the Sun is clearly visible in the design and layout of the stones.

The Triangle
Number 3 and its geometric representation the triangle are ubiquitous across megalithic sites. They represent the Moon.

Giants
Some megaliths are like statues of petrified giants frozen in time. The stones seem to be a storage of memory for the pyramid builders.

Stars
The megalithic sites in Bulgaria form patterns that remind us of star systemns and constellations like Orion, the Winter Triangle and the constellation of Cancer.

Planets
The planets are found in the layout of the pyramids and the shape and position of the megaliths.

Location
The location of the pyramids and the megalithic sites tells us that they were built as a network of sites, like a grid, that is connected.

Position
The pyramids talk to us by their design, cardinal alignments, elevation and erosion patterns.

Double Pyramids
In Bulgaria we find many double pyramids that remind us of the layout of constellations. They are a reflection of cosmic harmony.

Alignments
Pyramids and megalithic sites in Bulgaria are usually off exact cardinal alignments by around 15 to 30 degrees.

Elevation
Megalithic sites are situated at 250 metres elevation or above. There are no megalithic sites in the lowlands of the Thracian and Danube plains.

Erosion
The erosion patterns reveals the ancient origins of the pyramids.

Levels
The levels we see at the pyramids are proof that they are not a natural occurrence.

Shape
Across megalithic sites we find patterns in the shape of the stones. They talk to us by their size, design and positioning. They tell us about the intention of the builders.

Vegetal Shaped Megaliths
The soft rounded stones look molten as if they had been shaped like putty before hardening.

Lemuria
The Lemurian Stones are much larger, lumpier, less well-finished stones. They are found underneath at the lowest levels of the edifices and form the bulk of the pyramids.

Atlantis
The Atlantean stones are relatively smaller and better-finished. They are found on top of the Lemurian stones.

Skewer Holes
The skewer holes in granite stone have a regular diameter and are slightly heart shaped.

Suture Marks
Suture marks in the stone give the impression that the granite was pressed into shape like glass.

Composition
The composition of the stones tells us about their purpose and why did the pyramid builders raised such huge edifices.

Granite
Granite composites are found at most megalithic sites in Bulgaria. They have different compositions and colours.

Quartz
Quartz is found as crystals in granite composites and as blocks inlaid in regular patterns in granite megaliths.

Limestone
Limestone is used at megalithic sites located in the East of Bulgaria. The Double Pyramid of Binkos and the columns of Slanchevo are made from limestone. 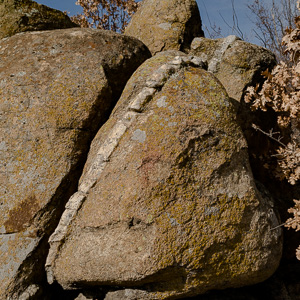